New thin-and-light laptops based on Intel’s latest 11th Gen Core CPUs have been hitting the market for a few months now, and today we have one of the first ones to have launched in India – the Acer Swift 3X. This is a compact 14-inch Windows laptop with an emphasis on slimness and lightness, but it also showcases Intel’s new 11th Gen CPUs and it’s first discrete GPU in a very long time, called the Iris Xe Max.

The Acer Swift 3X promises all-day battery life, good wired and wireless connectivity, and strong productivity performance. It’s time to see if it manages to live up to these claims.

The Acer Swift 3X is very light, which is the first thing you’ll notice when you pick it up. The 1.37Kg weight is distributed well so this laptop doesn’t feel too top-heavy if you use it on your lap. It’s also slim enough (17.9mm) to fit into most backpacks. The overall dimensions are compact thanks to the slim bezels on three sides of the display.

Acer has used metal for the most of the body work which makes the Swift 3X look a bit premium from the outside, but the black plastic insert around the display dilutes this a bit. Still, the body is well-built without any sort of flex around the keyboard area, and the metal lid offers good protection for the display. 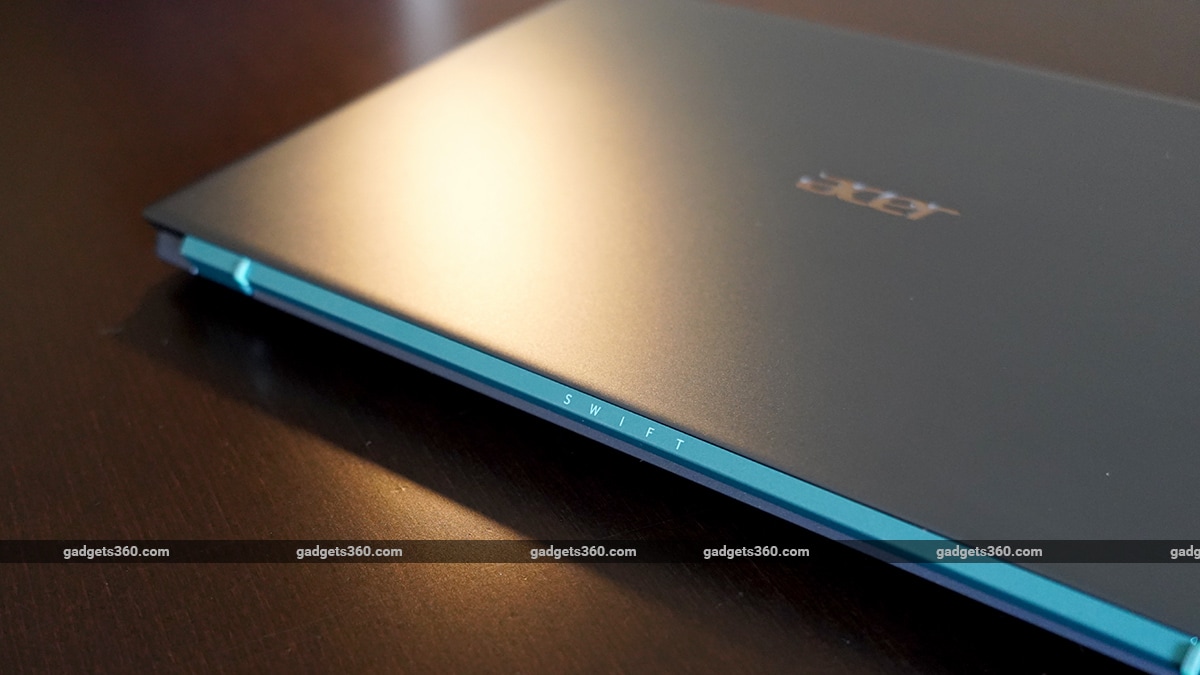 The Steam Blue colour that Acer sent me looks unique, especially with the teal accent along the length of the hinge. You can also get the Swift 3X in a Safari Gold colour trim. The base of the laptop is just thick enough to accommodate full-sized ports on either side. These include one HDMI, two USB 3.0 ports, a headphone jack, and a USB Type-C port with Thunderbolt 4.

The latter has the same theoretical bandwidth as Thunderbolt 3 but now supports connections for up to two 4K displays or a single 8K display. There’s a thin-pin charging port, although you can charge via USB Type-C too. The wall adapter pin feels flimsy, as there’s too much play when it’s attached to the laptop. There’s no SD card slot, which I found a bit disappointing.

The Acer Swift 3X’s hinge is designed in such a way that it raises the base at a slight incline when opened, which makes typing a bit more ergonomic. There are large vents on the bottom of the laptop for ventilation and an exhaust vent that’s visible just above the keyboard.

The chiclet-style keys are a bit small, which takes a bit of getting used to. The buttons are also flat and not contoured so it takes a while before you can confidently type fast enough. I think the keys could have been a bit larger. The direction keys also feel squashed, and the Pg Up and Pg Dn keys are placed very close to them. The trackpad is fairly wide but it doesn’t have the same responsiveness or accuracy as a glass trackpad. There’s a fingerprint sensor on the right side of the palm rest area for Windows Hello authentication.

The Acer Swift 3X has a 14-inch IPS display with a full-HD (1920x1080p) resolution, and a good maximum brightness of 300nits. This might not sound like much, but in practice, the panel gets very bright, and even during the day, I didn’t feel the need to crank the brightness level beyond 30 percent.

Apart from better framerates, the new GPU is capable of sharing thermal headroom with the CPU and its integrated GPU via a common software layer called Deep Link. In theory, this should function similar to AMD’s SmartShift technology which we saw in action in the Dell G5 15 (SE) (Review) gaming laptop.

The Intel Iris Xe Max GPU has a base clock speed of 1,650MHz and has 4GB of dedicated LPDDR4 memory. In addition to the discrete GPU, you also get an integrated Intel Iris Xe GPU with the CPU, which is based on the same architecture as the discrete one. Intel claims you’ll be able to leverage the AI processing and video encoding engines from both GPUs simultaneously for certain workloads, with compatible apps in the future.

Coming to the CPU, my Acer Swift 3X review unit had an Intel Core i7-1165G7 processor which is one level below the top-end model in this generation for thin-and-light laptops. It has four cores, eight threads, a base frequency of 2.8GHz and a maximum turbo frequency of 4.7GHz. My unit also had 16GB of quad-channel DDR4 RAM, a 512GB NVMe SSD, and 32GB of Intel Optane memory. That’s quite an impressive spec list for an ultraportable laptop.

The Swift 3X features bottom-firing stereo speakers with support for the DTS Sound Processing app, an HD webcam, and a 57WHr battery. You also get Wi-Fi 6 and Bluetooth 5.1.

Acer ships the Swift 3X with Windows 10 Home, along with Microsoft Office Home and Student 2019 and a trial version of Norton 360 antivirus. There are also the usual Acer apps such as Care Centre, which is handy for keeping track of firmware and BIOS updates. One option I wish Acer had included would be a way to lock the default functions of the Fn keys, since holding the Fn button and then hitting F3 or F4 to adjust the brightness can be a chore. I would have prefered to do this with a single press.

The Acer Swift 3X does an excellent job of handling regular computing duties. Windows 10 runs very well, apps open and close quickly, and multitasking isn’t sluggish either. Videos look good on this display, and viewing angles are decent. However, the speakers aren’t very loud even at full volume.

The touch response of the trackpad could have been much better, and at times even simple gestures weren’t registered correctly. The keyboard only has a single level of white backlighting, and as i mentioned before, the keys are smaller than usual which takes some getting used to. The fingerprint sensor works well and the laptop is quick to wake from sleep and let you resume your work. In terms of heating, the Acer Swift 3X does run slightly warm when idling on battery power, but this is only noticeable if you touch are around the intake vents underneath the laptop or the space near the exhaust vent above the keyboard. The heat isn’t felt much on the keys themselves so it didn’t bother me too much.

The speedy performance can be seen in strong benchmark scores too, for a laptop of its class. The Acer Swift 3X scored 579 and 2,282 points in the single and multi-core tests of Cinebench R20. In 3DMark’s Night Raid test, it managed 16,802 points, which is a good score as far as slim and light laptops go.

When it comes to file compression and video encoding, Intel’s new CPU and GPU put on a very good show. Compressing a 3.24GB folder of assorted files using 7Zip took just 2 minutes and 13 seconds, which is quicker than what the Dell G5 15 (SE) managed with its AMD Ryzen 7 4800H CPU. Encoding a 1080p AVI file to MKV H.265 using Handbrake took a little more than a minute, which is pretty quick.

Intel’s Iris Xe Max GPU and the 11th Gen CPU’s true potential can be fully realised if you use productivity apps designed to take advantage of Intel’s Deep Link technology. Intel has partnered with companies such as CyberLink, Topaz Labs, HandBrake, etc, to help speed up tasks such as video encoding, 4K streaming, and AI-based image upscaling, among others. But what about gaming? Is Intel’s new Iris Xe Max GPU capable of running modern games at playable framerates?

I fired up DOTA 2, which is a very popular MMORPG and is quite forgiving on non-gaming laptops. At 1080p and with the graphics slider pushed all the way to ‘Best Looking,’ the Acer Swift 3X was averaging around 50fps. Next up was Ashes of the Singularity: Escalation, which is a good-looking RTS game that happens to have a handy in-game benchmark. With the graphics preset at ‘High’ and using DirectX 12, I averaged 22.9fps, which is not great. In The Witcher 3: Wild Hunt, which is still a demanding open-world game, I got just about playable framerates of around 23fps with the ‘High’ preset. Dropping the quality settings of course resulted in smoother gameplay, but it’s still good to see that you can play this game even with many of the bells and whistles enabled. 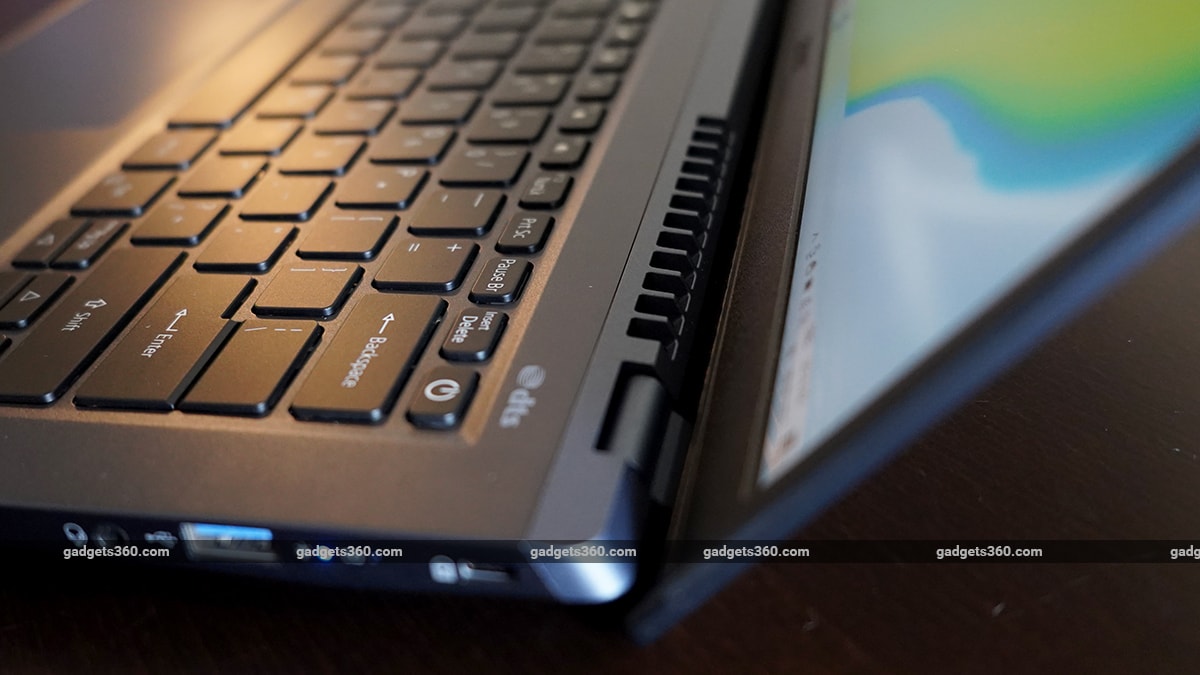 While older 3D games ran okay, I then shifted my focus to newer, more demanding titles just to see how far Intel’s new GPU can go. I chose two fairly graphically demanding games built on very scalable game engines – Far Cry 5 and Doom Eternal. In Far Cry 5, I was able to run the in-game benchmark on the integrated as well as discrete Intel GPUs. With the graphics preset set to ‘High’ and at 1080p, I averaged 26fps using the integrated Iris Xe GPU, and 29fps with the Iris Xe Max GPU. It’s not a huge leap in performance, but a better result nonetheless. Doom Eternal ran only on the discrete GPU, and here, I managed to get a decently playable average of 29fps at 1080p, with ‘Medium’ quality settings in the ‘Hell on Earth’ level.

When gaming, the Acer Swift 3X got fairly hot, and the exhaust fan was audible. The fact that newer 3D games ran at 1080p with acceptable graphics quality is quite a departure from Intel’s earlier GPU solutions. The Iris Xe Max is no replacement for Nvidia’s entry-level GeForce GTX or RTX GPUs but it feels like a step in the right direction. I would also recommend using Intel’s Driver and Support Assistant tool to keep the drivers of the Iris Xe Max GPU up to date, rather than relying on Windows Update.

Acer promises up to 14 hours of battery life from the Swift 3X but as we all know, these claims are often achievable only in controlled lab testing conditions. In the real world, you should expect somewhere around six to seven hours of actual usage, which is what I averaged during my test period. The Swift 3X did perform well in our Battery Eater Pro test, running for a solid three and a half hours. I think this kind of battery life is decent for a Windows laptop of its weight and size, and you should be able to get through an entire work day on one charge. The Acer Swift 3X is a power-packed ultraportable, with good I/O and performance

The Acer Swift 3X is available with a Core i7-1165G7 CPU, which is the variant that I had for this review, or an Intel Core i5-1135G7 CPU, with the rest of the configuration staying the same. The Core i7 variant is priced at an MRP of Rs. 1,09,999, while the Core i5 variant is priced at Rs. 92,999. You should be able to find these models selling for a bit less on Acer’s online store and at other e-tailers such as Flipkart and Amazon.

Overall, the Swift 3X is a fairly powerful thin-and-light laptop. It offers ample storage, a really bright display, decent battery life, and strong CPU performance. Intel’s dedicated GPU can pull off 1080p gaming in some modern games as it promised, and it’s good to see new hardware options that can make ultraportable laptops even more versatile.