Living with an HP EliteBook 845

In addition to the higher-end Elitebook x360 1040, I’ve also spent some time lately with HP’s EliteBook 845, part of HP’s slightly lower-end EliteBook 830/840 series. This series of laptops has the standard enterprise features but lacks some of the high-end extras of the 1000 series, such as presence detection and noise-cancelling microphones for video conferencing. But what really makes the 845 stand out is the AMD Ryzen Pro processor, which is unusual in enterprise laptops.

At first glance, the EliteBook 845 looks a lot like the 1040, with an aluminum chassis and a 14-inch display with smaller bezels than in previous years. It is not quite as compact as the 1040, measuring 0.75 by 12.73 by 8.45 inches (HWD), but it’s still pretty small and easy to carry, with a screen-to-body ratio of 85 percent. Starting weight is 2.97 pounds; with the power cord and adapter, the travel weight is 3.7 pounds. It’s not quite the lightest enterprise laptop, but it’s still very easy to carry.

AMD has been making great strides lately towards the enterprise market, and the Ryzen Pro designation adds the kind of security, manageability, and software stability functions that Intel offers in its vPro line, something that some enterprise IT departments seek. This includes out-of-band management using the DASH protocol of the Distributed Management Task Force (DMTF), used for things like remote configuration and reboots. There is an AMD plugin for some of the Microsoft tools, such as SCOM and Endpoint Manager, but in general so far AMD doesn’t have the third-party support that Intel has. Still, it’s getting there, and for many businesses, this will be enough.

The Ryzen processor offers an interesting profile for software. Most of the benchmarks ran notably faster than other lightweight enterprise notebooks, particularly the tests that stress graphics. If your workload includes a significant number of light-duty graphics, that’s a big advantage for this year’s Ryzen over Intel’s Comet Lake generation. (If you have heavy-duty graphics, you’ll want a discrete graphics processor, which isn’t available in enterprise machines of this size and weight.)

On more real-world enterprise tests, the EliteBook 845 took 64 minutes to run a complex Excel spreadsheet, which was competitive with the Dell Latitude 7410 but notably slower than the Lenovo ThinkPad X1 Carbon or the EliteBook 1040 G7, which took just 48 minutes. I never could get a large MatLab model to run, which is a bigger concern. (The same benchmark ran easily on the Ryzen 5 4500U- based HP Envy x360 13, where it completed in 61 minutes, so it may have something to do with HP’s software, but I couldn’t figure it out.)

It has a 53-watt-hour battery, and battery life was terrific for a machine of this weight. On PC Mark 10’s Modern Office test, it lasted over 15 hours.

The unit I tested supposedly had a 400-nit 14-inch FHD (1920 by 1080 pixel) display, and it looked good, but not as bright as the ones on the Latitude 7410 or X1 Carbon. (I thought the same about the display on the 1040 I tested. Both are available with 250-nit screens.) Other display options include variants of HP’s FHD Sure View Reflect privacy screen, or a touch screen, but there is no UHD option.

The left side of the unit has two traditional USB-A ports and a smart card reader; the right side has two USB-C ports (but no Thunderbolt), an HDMI port, and a power plug. Unlike most of its competitors, this machine was not designed for USB charging.

The EliteBook 845 keyboard has a similar feel to the EliteBook 1040, with a programmable key and the power button integrated on top but adds a pointing stick (which I appreciate). The touch pad is a bit smaller than the 1000 and adds physical buttons for left and right clicks (which is good if you have users used to pointing sticks.) The optional fingerprint reader is below the keyboard and seemed to work fine. In addition, it supports using the webcam for Windows Hello, which also worked well. Unlike the 1040, it does not have the Presence Aware feature for automatically locking when you walk away from the machine. 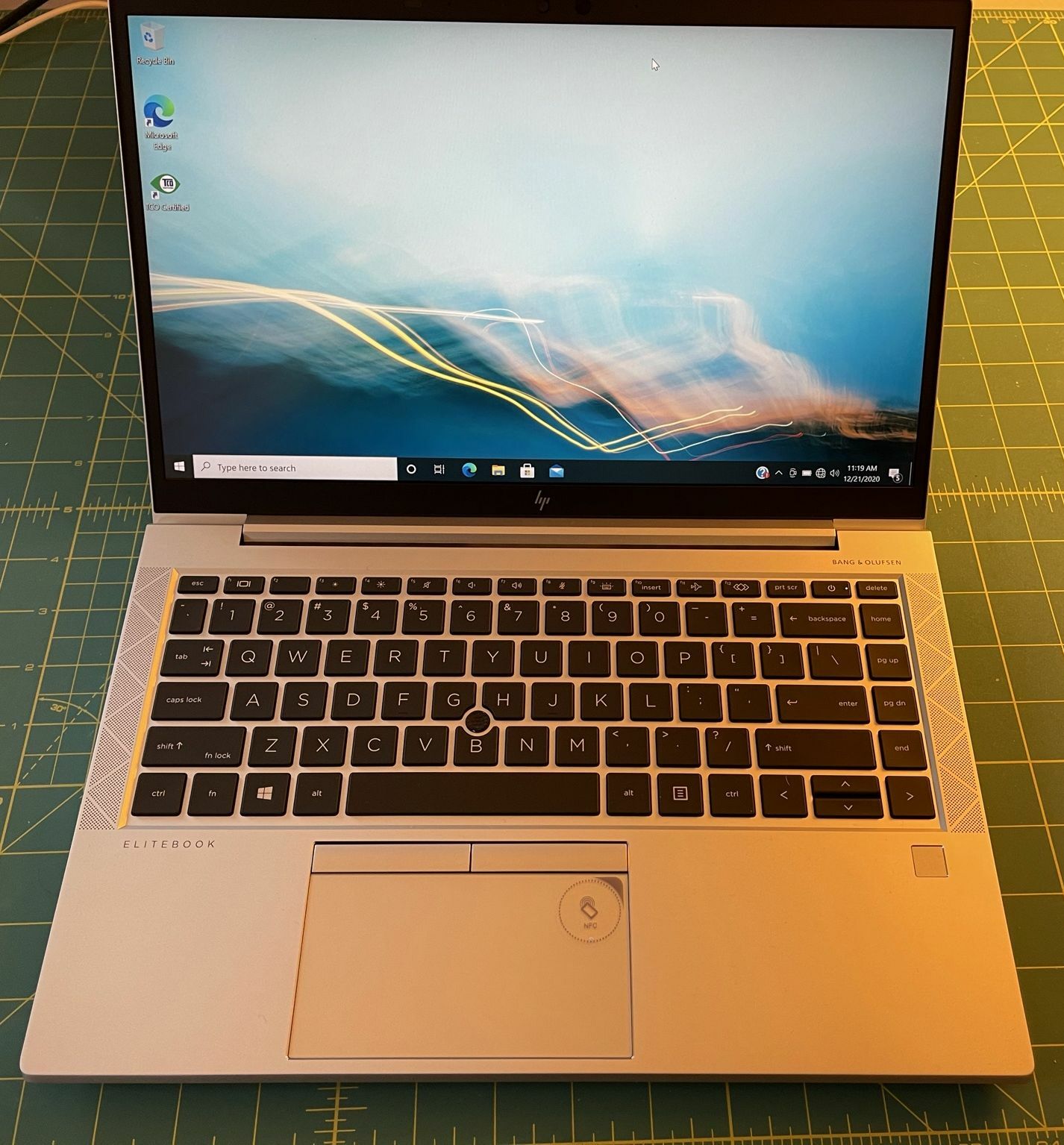 You really can tell the difference between the models in video conferencing. While the 720p webcam on the EliteBook 845 had a nice field of view, I found it often was blurrier and more blown out than on the other enterprise laptops I’ve tried recently. It has a physical privacy shutter on top of the camera instead of an electronic button found on the 1040, which I found was fine. It has two top facing speakers on the side of the keyboard, along with two front-facing microphones, plus a world-facing microphone with noise-cancelling features. Still, the audio seemed a bit thinner than on its competitors.

On the other hand, for security, it has mostly the same software as the 1040, including Sure Start for protecting the BIOS, Sure Click for protecting against bad websites, and Sure Sense, for detecting malware.

Overall, the EliteBook 845 is a fine enterprise laptop, with an aluminum chassis and very good performance for most business tasks at a good price. Many people will probably want to stick with Intel because of its more proven enterprise management and compatibility, but for those who are willing to try AMD processors, it offers a compelling price/performance story. Although the 845 lacks some of the features of the higher-end models, such as presence detection and improved video conferencing features, it handles all the basics well.