The Fastest Laptops for 2021

You’re here because you want the fastest laptop computer your money can buy? That’s a challenging goal: It depends on how you define “fast,” and to some extent on how you define “laptop,” too. Still, we’ll try to help you hit that moving target.

The short version? There are different kinds of speed when you’re talking about laptop performance, some of them intertwined and some not. And it pays to know what kind you need, so you don’t overspend for one at the expense of the other.

The idea of speed can be sliced a bunch of ways, but in practical terms, you can look at it in terms of (1) CPU processing power and (2) graphical prowess for tasks such as PC gaming, 3D rendering, or graphics-accelerated content creation. The two are very different things, and we benchmark-test all of the systems that we review with both kinds of speed in mind.

Some laptops are strong in one area and not the other. For example, it’s possible to have a notebook with a top-end processor packing lots of cores and threads, but paired with a minimal graphics solution. (Perhaps that is just the processor’s integrated graphics silicon, historically no match for a discrete graphics adapter.) A laptop like this would net you great performance on programs and workloads that take advantage of lots of CPU resources, but little in the way of power for gaming or applications that rely on graphics acceleration. 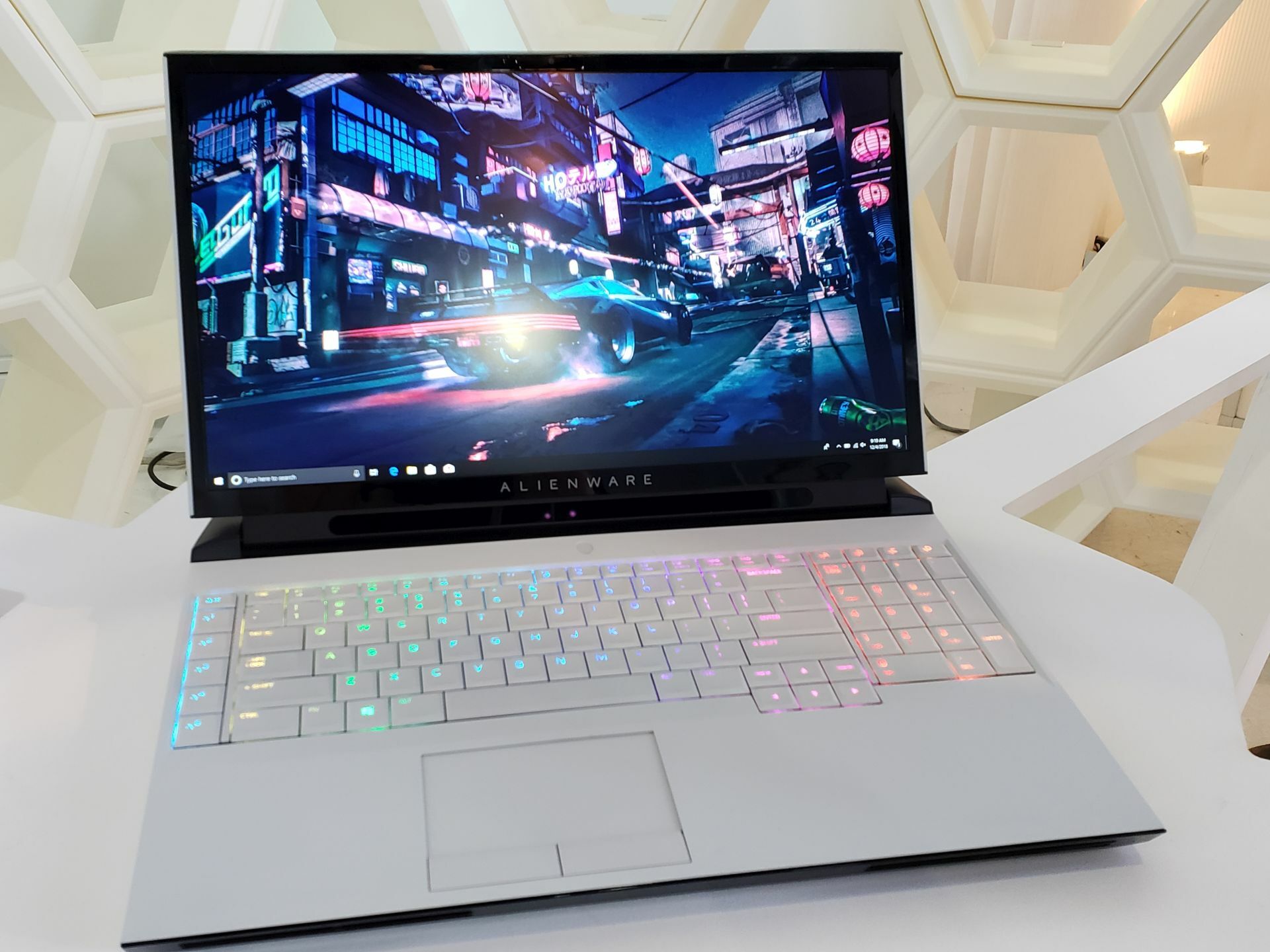 Likewise, having a dedicated graphics processor, the beefier the better, is the key for speed in games. Most of the time, CPU speed will contribute to the gaming equation insofar as it isn’t a limiter or bottleneck for the graphics chip.

Now, the prescription for either need—speed for raw processing, or speed for graphics—is to pack in as potent a main processor or graphics processing unit (GPU) as you can. But when you do that, it illustrates the interplay of three key factors in laptop design: cost, power consumption, and thermals.

Higher-powered CPUs or GPUs on a given platform tend to (1) cost more, (2) require more electricity when fully engaged, and (3) run hotter when taxed to the max. That’s why buffed-up gaming laptops or high-powered mobile workstations tend to be thick, heavy, expensive beasts. Their high-end chips not only cost more, but require more space and weighty thermal hardware to keep cool.

The best of all possible worlds—maximum graphics and CPU power, maximum battery life, and thin, light design—is a goal ever out of reach. Rather, laptop design is always a trade-off of these factors, where it’s not possible to twist all three of these knobs to 10.

Laptop CPUs: What to Look For

The fastest laptops, from a raw-CPU perspective, tend to fall into four classes. The first is made up of business machines with top-end processors but integrated graphics. You’ll find them under top vendors’ business brands, such as Latitude for Dell, ThinkPad for Lenovo, and EliteBook for HP.

The second consists of high-end gaming laptops that pair a powerful mobile GPU, chosen to blaze through the latest games at a level appropriate for the laptop’s screen, with a CPU that is at least sufficient not to hamper the graphics chip. (That malady, when it affects a PC game, is often dubbed being “CPU-limited.”)

Next are mobile workstations, productivity-minded laptops designed for professional content creation and data analysis and often optimized for the specific advanced applications they use. (This is often referred to in workstation marketing lingo as independent software vendor or ISV certification; these laptops cost their premium, in part, because of it.) You can identify these machines either by brand, such as HP’s ZBook and Dell’s Precision, or by the Nvidia Quadro or AMD Radeon Pro or FirePro GPUs they carry.

Finally, some notebooks such as Gigabyte’s Aero 15 OLED XB and HP’s ZBook Create G7 target creative pros such as video editors and game designers. They overlap with mobile workstations but lack those systems’ ISV certifications for specialized apps. (They may feature Nvidia GeForce rather than Quadro GPUs, for instance.) Both high-speed and stunning high-resolution screens are featured here. 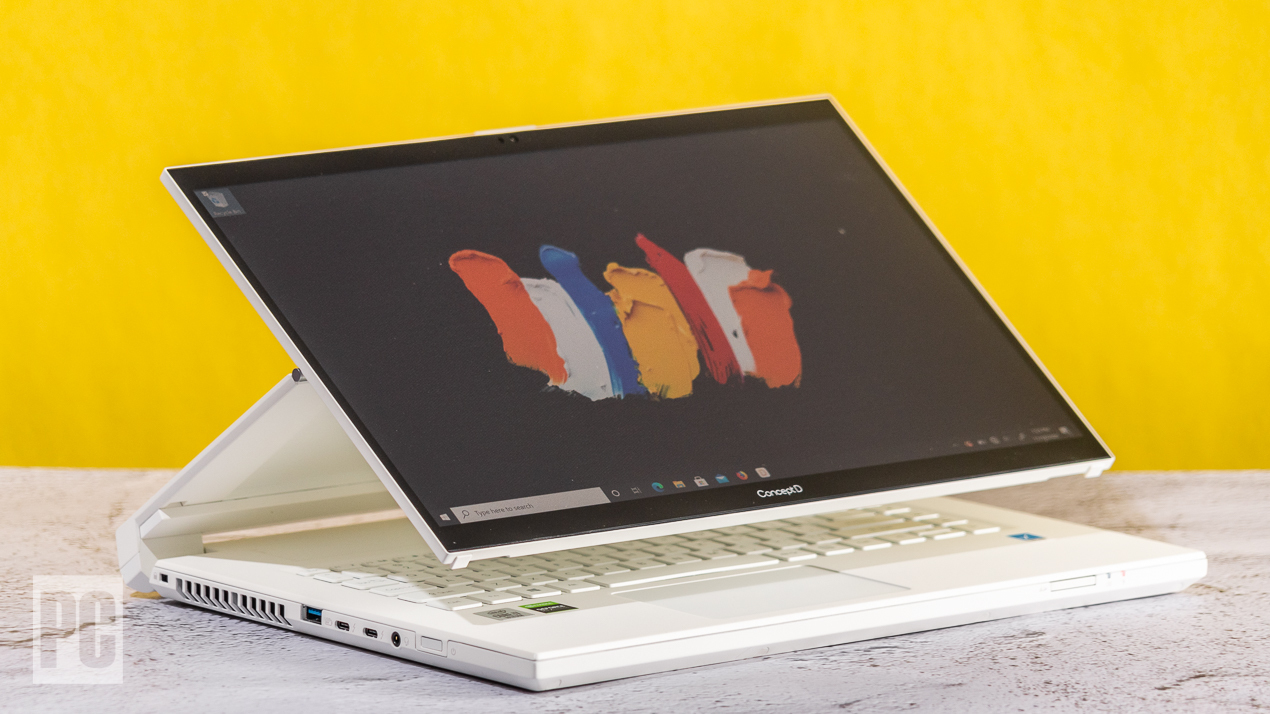 Most Intel CPU names end in a capital letter or two, which tells you a bunch about their identities. Any Core chip ending with an “H” is a maximum-power mobile chip with up to 16 processing threads that your software can tap via a feature known as Hyper-Threading. Not all CPUs support Hyper-Threading, but if the programs you run are fully multi-threaded (that is, able to take advantage of all available computing threads when performing demanding tasks), this will be a big plus.

You’ll tend to see the H-series chips only in weighty business machines meant for heavy calculation work or data analysis. You’ll see the H-series almost all gaming laptops, and in some mobile workstations. Some high-end workstation laptops make use of Intel’s Xeon processors, which are at heart server chips specially designed for the demands of accelerating specialized advanced-calculation and content-creation programs, as well as for running all-out for extended periods of time. But a Core i7 or Core i9 H-series is more common, and definitely the sign of a legitimately high-end configuration.

CPUs ending in “U,” on the other hand, signify an ultramobile processor. These are lower-power chips designed to work in slimmer, lighter laptops that have limited thermal headroom. Now, depending on what you do with your laptop, these can be perfectly fine CPUs. You’ll be able to do everyday business or office tasks on a U-series Core i5 or Core i7 with no complaints, and on the best of them, demanding content-creation tasks will be possible without painful delays. Just know that the H-series is where the real muscle is in laptop land. 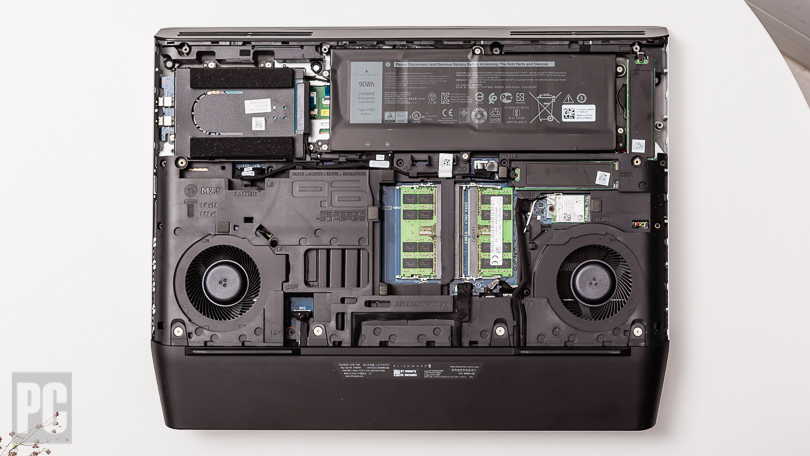 What about Intel’s rival, AMD? The company’s Ryzen and Ryzen Pro mobile processors have historically tilted more toward office apps and moderate gaming (with integrated graphics that often top Intel’s) than the full-tilt gaming and workstation prowess of the best separate CPU and GPU combinations. But the Ryzen 4000 series mobile CPUs that debuted in 2020 changed that in a big way. The eight-core Ryzen 7 4800H found in gaming rigs like the MSI Alpha 15 and the Asus TUF Gaming A17 can slug it out with Intel’s best.

We should also mention a few extreme gaming rigs, mostly from boutique vendors such as Origin PC, that actually use high-octane desktop CPUs in laptop chassis. These models, represented in this roundup by the Alienware Area-51m, are more luggable than portable, laptops more in shape than weight, with battery life measured in minutes rather than hours. They’re of interest only to those with deep pockets and a decided need for the maximum available CPU horsepower.

If the kind of speed you are after is for PC gaming, what you need is a laptop with a dedicated graphics chip, or GPU. Most of the leading-edge gaming laptops these days use various flavors of Nvidia’s GeForce mobile chips.

If you’ll use your gaming laptop with an external monitor or monitors that have a higher resolution than the laptop’s built-in screen, you might consider a GPU that’s several steps ahead of the laptop’s own screen. Otherwise, you’ll want to match the performance of the GPU with the upper limits of the laptop’s own panel. 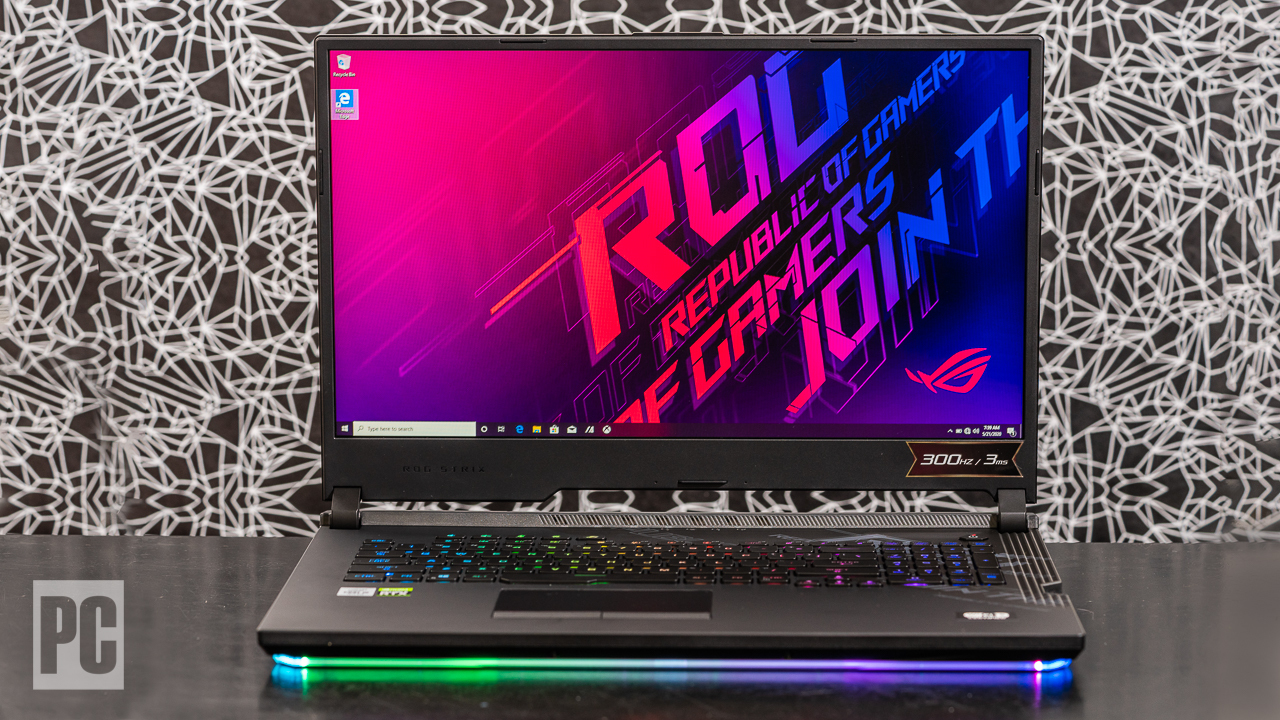 One wrinkle to all of this is the emergence of high-refresh displays in laptops. A typical 60Hz laptop display (which redraws the screen 60 times per second) won’t show much benefit from frame rates in excess of 60 frames per second (fps). If your high-powered GPU can churn in a given game at a consistent 100fps, you won’t see much added smoothness. However, some gaming laptops are starting to ship with high-refresh panels capable of rewriting at 120Hz, 144Hz, or even 300Hz. These screens can make use of those extra frames for smoother game play, and can justify a high-powered GPU paired with a 1080p screen.

On a related note, laptops with screens that support Nvidia’s G-Sync technology are worth looking out for. In these, the screen rewrites at the same rate that the GPU churns out frames, in essence adjusting the refresh rate dynamically. This reduces screen artifacts and “tearing” (in which parts of the screen misalign for a beat as they are rendered). With a high-refresh screen, a top-notch GPU will be better leveraged; with G-Sync, a marginal one will be enhanced.

Another factor, if you’re shopping for a maxed-out laptop, is virtual reality compatibility. You’ll want to look for a model with a GeForce GTX 1660 Ti or higher GPU if you mean to run a virtual reality headset. It’s best to opt for the right GPU now if you might want to explore VR later, as you can’t upgrade the GPU after the fact. (See our guide to the best laptops for VR.)

We’ve mentioned one Nvidia technology, G-Sync. You may encounter another one called Max-Q, which slightly dials back the speed of a GeForce graphics chip in order to reduce its operating temperature, letting you get, say, an RTX 2070 in a thinner laptop with quieter cooling fans than would otherwise be possible.

Assessing storage speed is more straightforward than weighing CPUs or GPUs. The storage solutions in today’s laptops fall into three classes: hard drives, SATA solid-state drives (SSDs), and PCI Express SSDs. That sequence is a fair summary of their relative speed (slowest, faster, fastest) and their relative cost (least to most expensive, in terms of cost per gigabyte).

These days, the fastest laptops will use PCI Express SSDs. These are implemented as M.2 drives (see our guide to the best M.2 solid-state drives) or soldered down to the motherboard, and top out in most configurations at 1TB. PCI Express describes the bus pathway that your data takes when using these drives, and it is often associated today with the term “NVMe,” a protocol for making the most of PCI Express drives’ speeds. Both are good buzzwords to look out for. The alternative to a PCI Express SSD is Serial ATA or SATA, which is perfectly serviceable in an SSD but is yesterday’s interface. Often, a laptop vendor won’t differentiate between the two. 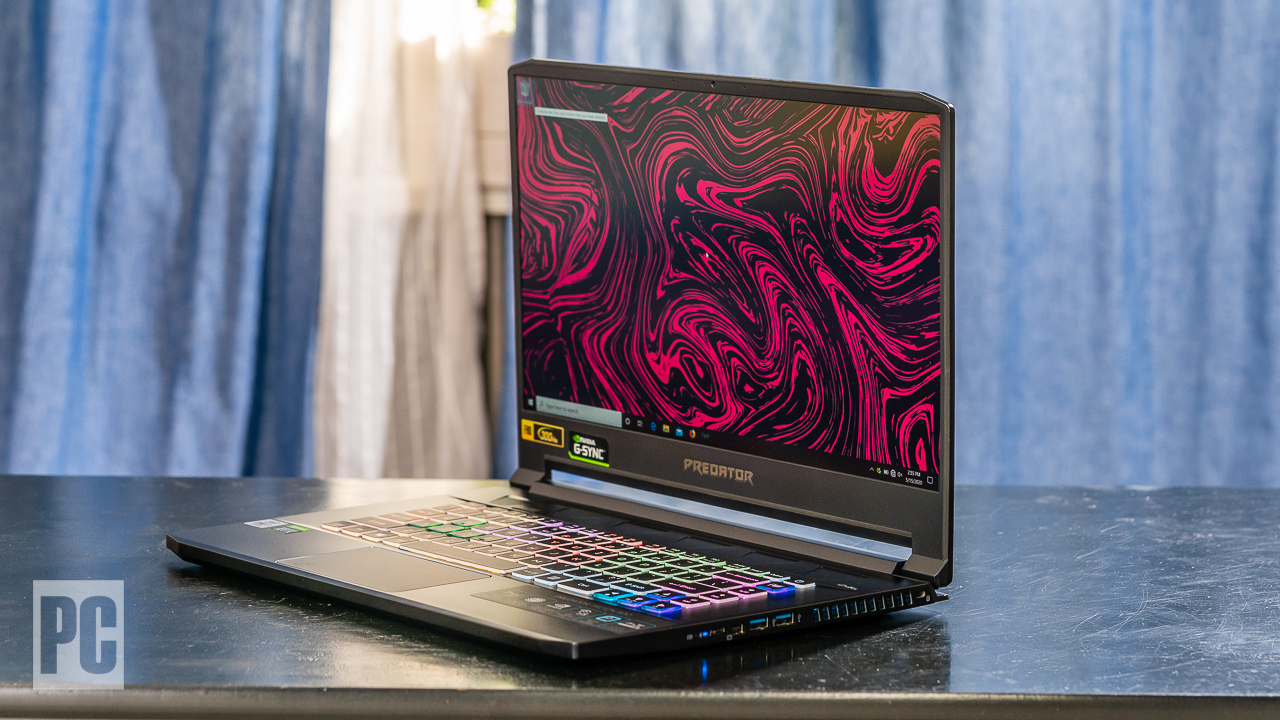 If you’re looking to maximize real and perceived speed in a laptop, the boot drive should be an SSD, and preferably a PCI Express/NVMe one. If the laptop has a hard drive, it should be implemented as a secondary drive used for bulk storage. You’re more likely to see such dual-drive arrangements in larger laptops.

As for assessing the RAM in the system, it’s an exercise in making sure you get enough for your typical tasks without overpaying or underestimating. 8GB is the barest minimum we’d settle for in a power laptop, with 16GB a better baseline. More could make sense if you make use of RAM-hogging content-creation apps like Adobe Photoshop. If you’re outfitting a tricked-out gaming laptop, 16GB ought to do.

Ready for Our Recommendations?

The laptops below are very good places to start looking if absolute speed is a key concern for you. We looked at Cinebench R15 benchmark scores for a measure of raw CPU speed and multithreaded power; this test taxes a CPU to its limits on all cores and threads. We also checked out 3DMark scores for a measure of graphics processing capability and PCMark 10 results for office productivity and overall system performance. (Click through to the actual reviews linked below for details and much more performance talk.)

Use these as launching points for your laptop search. Remember, many of these models can be bought in lesser or brawnier configurations, so the limit tends to be how much money you have, and how much hardware a laptop maker can stuff in a 17-inch-screened chassis within thermal and practical limits.